1833 – Lizzie’s father, Charles, runs a business from his home at 8 Kent Place. This is the home they rented from James Greenacre, who would later commit murder. (I’ve written an account of the murder in the Pre-Rapahelite Sisterhood blog post, Victorian Murder.)

1849 – Lizzie works at Mrs. Tozer’s hat shop and is introduced to the Pre-Raphaelite Brotherhood. One anecdote states she was discovered by Walter Deverell, who paint her as Viola in his painting Twelfth Night. Another tale says she was introduced to the Pre-Raphaelites by their friend, poet William Allingham, who may have been courting one of Lizzie’s fellow milliners at the hat shop. Dr. Jan Marsh, author of Pre-Raphaelite Sisterhood and The Legend of Elizabeth Siddal, believes that Lizzie entered the Pre-Raphaelite circle through her own artistic work and interest, by showing her drawings to Deverell’s father, who was Secretary of the Government School of Design in London. I wholeheartedly agree with Dr. Marsh’s line of thought.

1852 – Lizzie models for Millais’ Ophelia. Also in this year, her brother Charles dies. Lizzie models for Holman Hunt again (for the hair of Jesus in The Light of the World). It also seems that it is some time time this year that DGR decides that he does not want Lizzie to model for any other artist. Lizzie officially stops working for Mrs. Tozer.

1852 is the first recorded mention of Lizzie’s ill health.

Nov. 1852 – DGR moves to 14 Chatham Place in Blackfriars, London and takes Lizzie on as a pupil.

March 28, 1854 – DGR introduces Lizzie to his sister Christina. By this time, according to Lucinda Hawksley’s book, their friends had recognized them as a couple for two years.

1854 –  Lizzie’s poem Fragment of a Ballad possibly written (Lucinda Hawksley’s biography is my source for this date. I have never seen dates for Lizzie’s poems in any other source). Deverell dies in 1854. Anna Mary Howitt and her sister persuade Lizzie to see a doctor (Dr. Wilkinson) for her health. Also that year, Lizzie travels to Hastings for her health (encouraged by Barbara Leigh Smith). DGR’s father dies. Instead of staying with his family, he joins Lizzie in Hastings as soon as the funeral is over. Also this year, Lizzie starts her illustration of Clerk Saunders.

1854 continued – After returning to Chatham Place, Lizzie starts an illustration for DGR’s poem Sister Helen. She continues in her studies as DGR’s pupil, as well as being his model.

1855 – Art critic John Ruskin purchases all of Lizzie’s works. DGR wrote about it in a letter to William Allingham:

About a week ago, Ruskin saw and bought on the spot every scrap of designs hitherto produced by Miss Siddal. He declared that they were far better than mine, or almost anyone’s, and seemed quite wild with delight at getting them. . . .

Ruskin later becomes her patron. Also in 1855, Lizzie finally meets DGR’s mother. Ruskin sends Lizzie to see Dr. Henry Wentworth Ackland in Oxford on May 21, 1855. Ruskin also finances a trip to France for Lizzie’s health. While in Paris, DGR joins her there against Ruskin’s wishes. DGR introduced her to Robert Browning. who was also in Paris, but the meeting did not go well, perhaps due to Lizzie’s use of laudanum. Lizzie then travels to Nice, but had spent all of her money. She wrote to DGR, who had returned home. He quickly painted his triptych, Paolo and Francesca de Rimini, and sold it to Ruskin in order to bring Lizzie the money. It is during Lizzie’s travels that DGR, left home alone, met William Morris and Edward Burne-Jones. Also this year, Lizzie exhibited her work in Charlotte Street.

1856 – Sept. 8, 1856 Ford Madox Brown records in his diary that Rossetti has given up Annie Miller and is committed to Lizzie and “he and Guggum seem on the best of terms now.” Rossetti and Siddal are named as godparents to Madox Brown’s new baby Arthur Gabriel. In November DGR announces plans to marry Lizzie, but later changes his mind. A furious Lizzie leaves DGR, fleeing to Bath with her sister Clara. She refuses to see DGR, but he joins her there in December and they are reconciled.

1857 – Several of Lizzie’s paintings and illustrations appear in the Pre-Raphaelite Exhibition in Fitzroy Square, Marylebone. Lizzie was the only female artist. An American from Massachusetts purchased Lizzie’s painting Clerk Saunders.

Lizzie travels to Matlock, Derbyshire and later travels to Sheffield. She attends the Sheffield School of Art. During this time DGR is in Oxford, along with William Morris , Edward Burne-Jones and others painting murals for the Oxford Union.

1857-58 (?) – DGR rushes to Matlock when he hears she is seriously ill. He continues to travel back and forth for several months.

1860 – Lizzie is extremely ill; DGR is convinced she will die soon. On May 23, 1860 Lizzie was well enough to make it to the church and she and Rossetti are married (in Hastings). They honeymoon in France.

October 1860 they move into Chatham Place permanently. Lizzie writes the poem At Last during her pregnancy.(According to Lucinda Hawksley bio. I am still trying to find other sources to validate the poem dates.)

Sometime toward the end of 1861, Lizzie is pregnant again.

February 1862 – Lizzie goes out to dinner with DGR and Algernon Charles Swinburne, returning home around 8:00. DGR leaves for the Working Men’s College. He returns home at 11:30 and cannot revive Lizzie. Help is summoned. DGR, unwilling to believe that she can not be saved, has four different doctors summoned. Each of them try and fail to revive her.

You can read the transcript of the inquest here.
1869 – Rossetti has Lizzie’s grave exhumed in order to retrieve the manuscript of poems that he had buried with her. 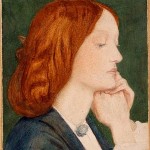