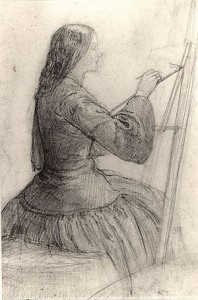 In 1849, Elizabeth Siddal was working at Mrs. Tozer’s hat shop when she was introduced to the artists of the Pre-Raphaelite Brotherhood. One anecdote states she was discovered by Walter Deverell, who paint her as Viola/Cesario in his painting Twelfth Night. Another tale says she was introduced to the Pre-Raphaelites by their friend, poet William Allingham, who may have been courting one of Lizzie’s fellow milliners at the hat shop.

Dr. Jan Marsh, author of Pre-Raphaelite Sisterhood and The Legend of Elizabeth Siddal, believes that Lizzie entered the Pre-Raphaelite circle through her own artistic work and interest, by showing her drawings to Deverell’s father, who was Secretary of the Government School of Design in London. I wholeheartedly agree with Dr. Marsh’s line of thought.

It was the charismatic Dante Gabriel Rossetti who not only drew and painted her obsessively, but encouraged Lizzie in her own artwork and poetry. Their relationship was intense and rocky, with an informal engagement that lasted on and off for a decade.

Sadly, their marriage was short. The couple suffered a stillborn daughter and Lizzie, in frequent ill-health,became dependent on laudanum. She died in 1862 of an overdose.

The rest of Lizzie’s tale is famous for its macabre nature: in his grief, Gabriel buried his only manuscript of his poems with Lizzie. The poems, nestled in her coffin next her famous copper hair, haunted him. Seven years later, he had her coffin exhumed in order to retrieve the poems for publication.

The story was spread that Lizzie was still in beautiful, pristine condition and that her flaming hair had continued to grow after death, filling the coffin. This, of course, is a biological impossibility. Cellular growth does not occur after death, but the tale has added to Lizzie’s legend and continues to capture the interest of Pre-Raphaelite and Lizzie Siddal enthusiasts.

Unfortunately for Elizabeth Siddal, she lived in a time where addiction was a taboo subject and little was known about post-partum depression. She lived within a cycle of illness, addiction, and grief with no useful resources available to her. Although she pursued a creative outlet while most women were denied modes of self expression, Lizzie was never able to move beyond the addiction that eventually claimed her life.