A new article in the Spectator explores Barbara Leigh Smith, later Bodichon.  Written by Charlotte Moore,  this charming piece introduces us to her ‘Aunt Barbara’, whose circle of friends included many famous Victorians.   I recently saw the sketch that Barbara made of Elizabeth Siddal in The Art of the Pre-Raphaelites by Elizabeth Prettejohn.  The sketch, currently owned by Mark Samuels Lasner, shows Lizzie posing with irises in her hair while Lizzie posed for Bodichon, Anna Mary Howitt, and Rossetti.

Via The Spectator, please click to read entire article:

‘Dante Rossetti is my favourite of the young men [the Pre-Raphaelites],’ Barbara told Bessie Parkes, but she was even more interested in the artistic talent of Lizzie Siddal, Rossetti’s muse and mistress, declaring her ‘a genius’. She saw that tuberculosis would soon finish Lizzie — ‘Rossetti is like a child, he cannot believe she is in danger’ — and invited the couple to Sussex, hoping that country air would help. She, Rossetti, and Anna Mary Howitt, another artist friend, sketched Lizzie with irises in her hair.

In 1870, eight years after Lizzie’s death, Rossetti exhumed the poems he had buried with her. Now in love with William Morris’s wife Janey, and hooked on chloral hydrate, Rossetti was approaching a breakdown. Barbara invited him to recuperate at Scalands. ‘Barbara does not indulge in bell-pulls, hardly in servants to summon thereby,’ he wrote to the poet William Allingham, another signatory, ‘what she does affect is any amount of through draught.’ His jaunty tone belies the tension in the house. The Morrises came to stay. Rossetti persuaded William to return to town leaving Janey behind, so Scalands became the setting for another doomed tryst. 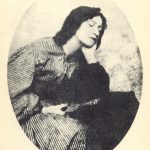