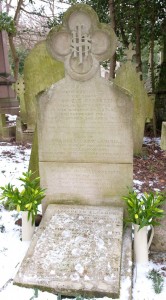 Thank you so much to Dr. Jan Marsh for sharing this. If you have not already done so, I highly recommend her books Pre-Raphaelite Sisterhood and The Legend of Elizabeth Siddal.
The 150th anniversary of Elizabeth Siddal’s death on 11 February 1862 from an opiate overdose is being marked at her graveside in Highgate Cemetery tomorrow morning, with a display in the newly redecorated funeral chapel in splendid Puginesque style, and a lecture in the evening. If weather permits – ice and snow create hazardous access to off-path graves – the Cemetery tours throughout the day will visit the Rossetti tomb.

Lizzie died in the early hours of 11 February, having taken an excessive dose of laudanum the night before when going to bed. The inquest verdict was accidental death, but ever since rumours have persisted that she intended to die. She was suffering from severe post-natal depression following the stillbirth of her daughter the year before, and friends reported that she was in a highly disturbed state of mind. Rossetti did not like to leave her alone at home in the daytime [so why leave her alone in the evening?]

On the morning of the funeral 17 February 1862, he placed in the open coffin the manuscript of poems he had been preparing for publication, which was then buried with Lizzie at Highgate. In 1869, notoriously, he arranged for the coffin to be exhumed and the poems retrieved; with others they wre published the following year.

He declared:
‘The truth is that no one so much as herself would have approved of my doing this. Art was the only thing for which she felt very seriously. Had it been possible to her, I should have found the book on my pillow the night she was buried; and could she have opened the grave, no other hand would have been needed.’