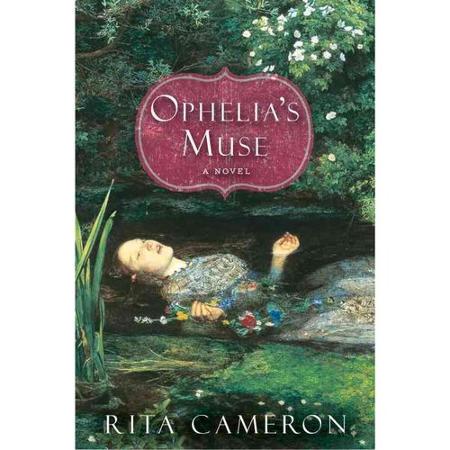 This review was previously posted at Pre-Raphaelite Sisterhood.
The romance of Dante Gabriel Rossetti and Elizabeth Siddal lends itself well to fiction. It’s a story that has it all: beauty, pathos, and the synergy of artistic creation that flowed between them. Author Rita Cameron’s new book Ophelia’s Muse tells the story of Elizabeth Siddal’s discovery by the Pre-Raphaelite circle and how it led to an increasingly rocky relationship with Rossetti.
Their relationship has Dantesque tones, not surprising since Rossetti grew up in a family that was steeped in Dante scholarship. He placed Lizzie on a pedestal, casting her as his Beatrice. Life as a muse isn’t easy, and a pedestal isn’t a comfortable place for any human to live. Inevitably, their relationship falters. Cameron focuses on the difficulties in their relationship. Much attention is given to Lizzie’s insecurities regarding Rossetti, especially where his roving eye is concerned.
Purists may have some issues with a few things in the book. Rossetti never exhibited in the Royal Academy, yet he does in Ophelia’s Muse and it’s a pretty big plot point. Also, he is only ever referred to as Dante when we know from contemporary sources that family and close friends consistently called him Gabriel. So if dramatic license in Pre-Raphaelite inspired fiction is a sore spot for you, this may be a hindrance to your enjoyment of the book.
Pre-Raphaelite fiction always holds the possibility of bringing new fans to this rich artistic movement. I feel confident that Ophelia’s Muse will do the same and I’m thrilled that Cameron’s readers may begin their own pursuits, embarking on the search for the artists, their works, and their models. Speaking from personal experience, the Pre-Raphaelite circle pulls you in like the rabbit hole that led Alice to Wonderland. It is a never ending delight.
You can visit Rita Cameron’s website, follow her on Twitter as @OpheliasMuse, and follow her author page on Facebook.
Share: Facebook Twitter LinkedIn Reddit Pinterest Email