Have you heard about this beautiful project?  If not, then allow me to warn you that you about to be swept away by WAG Screen’s attention to detail and beauty in this glorious production!

And our dear Lizzie has a cameo!  I’ll share more about that in a bit, but first let me give you some basic info about the film, photos, trailers, etc.
2009 is the bicentenary of the birth of Alfred, Lord Tennyson in Lincolnshire. As part of the celebrations a major exhibition of Pre-Raphaelite art, including some of Waterhouse’s works, will be shown at The Collection, Lincoln from May.
WAG Screen is also making a short filmed dramatisation of the Lady of Shalott as part of the 2009 Tennyson bicentenary celebrations. They are working very closely with the Waterhouse paintings of the Lady of Shalott and have gone to great lengths to replicate her clothes, her boat and, currently, her loom. To find out more visit their web site at: www.theladyofshalott.co.uk
The film will also be shown at the Collection in May 2009.

The woman portraying the Lady of Shalott is perfection! Or, in Pre-Raphaelite terms, she is a stunner. 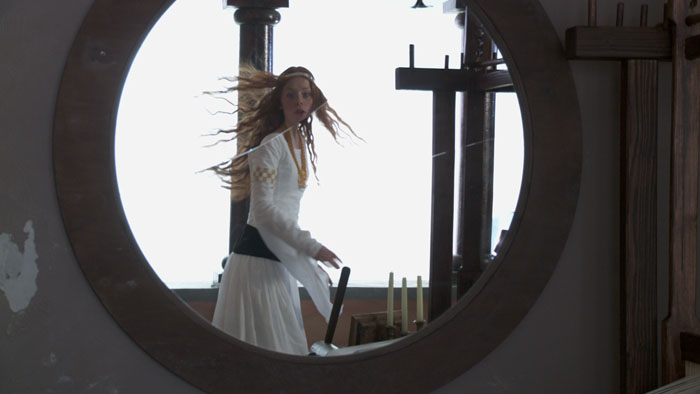 The photo above is from the final day of filming of The Lady of Shalott film project. More photos can also be seen at The Beautiful Necessity here and here. An excerpt from an email from Pauline at WAG Screen says “Note the candles in the
foreground – they are the ones she will take down with her to the boat.
Victoria Rigby – who plays the Lady of Shalott – has been superb, not only
does she look the part and can act and sing, but she is a delight to work
with too.”

Judging from the photos, Victoria Rigby is indeed a perfect choice for the Lady of Shalott. And the details in costuming and set design are impeccable, to say the least. I think that this project is an inspired idea and it is so easy to see the level of craftsmanship that has been poured into every moment of this film. 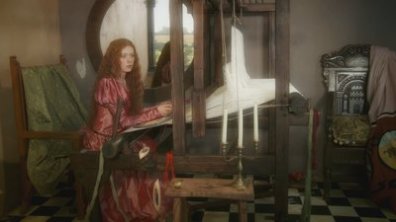 Victoria Rigby as The Lady of Shalott

The film will be made available on DVD! I asked Pauline of WAG Screen about the purchase of the film on DVD. She answered,“Thank you Stephanie – yes we will make it available on DVD and, since we are
a not-for-profit group, any money we make from sales will be ploughed back in to the next project.”

When I have info about DVD purchase, I’ll post it here. I want to be able to support their projects!

How does Lizzie fit in?  Several weeks ago, I received an email from Pauline of WAG Screen.   Here’s a snippet:

As part of our filmed dramatisation of the lady of Shalott we are also recording an actor as Tennyson reading his poem to an after dinner audience.  It is a fictional event, so for fun we thought we would include some of the artists who illustrated his work including Holman Hunt and Rossetti, so I couldn’t resist including Lizzie Siddal in the audience. Most of the audience will be in formal dress for 1856, but the artists rather more bohemian.

How exciting. They’ve posted a few stills on their Facebook fan page and I’ll share a couple of them here.  There are more at this page of  Pre-Raphaelite Sisterhood: 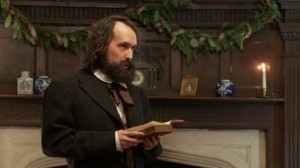 1 thought on “The Lady of Shalott Film project”

Commemoration of Siddal and Rossetti’s marriage