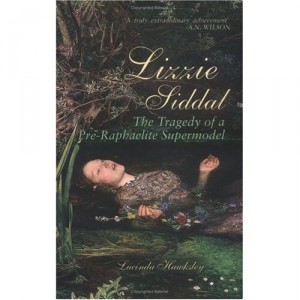 This book runs to 230 pages in its paperback form, including pictures, notes and references etc. It is quite simply one of the most readable accounts of Lizzie’s life as a progressive woman, artist and poet during the early Victorian period in 19th Century England.

Her life is documented from her youth as a sibling within a working class/artisan family aspiring to get back to more prosperous times, to her formative times as a model to the artists of the new Pre-Raphaelite movement, to her adoption of their values and ideals to become a force within that movement in her own right.

Throughout the book comes a feeling of sympathy for Lizzie as she tries to make the best of her life in a society where the art establishment is dominated by men, the Pre-Raphaelite movement itself is daring to push the boundaries of how painting is viewed and appreciated, and her unrestrained use of laudanum threatens to stifle her creativity just when her work is gaining wider recognition and appeal.

On the positive side, the book does not sensationalize any aspect of Lizzie’s life or spend too long going into detail just for the sake of it. Her decisions and actions in response to the circumstances she finds herself in are put into historical context using some well known references and others that appear to be original research from personal letters, old newspaper files and the recorded recollections of friends and acquaintances.

When I finished reading the book I felt that I could have been reading just an introduction to the life of Lizzie Siddal, as having had such an insight into what drove and motivated her, I wanted to know much more about the effect she had on those around her and the wider perceptions of her amongst Victorian society. What I was really left wanting to know is: in today’s world of equality and opportunity, just what could Lizzie have achieved?

And now from the personal viewpoint:

I own up to having been in love with Lizzie Siddal for more than 20 years. I was left frustrated having read this book, at not being able to be there at the time to tell Lizzie that Dante Rossetti was a loser and a waster (in terms of women, love, sex and romance), albeit a gifted talented artist and visionary, but who in normal circumstances was never going to marry her. He was a male chauvinist, as were most men at the time by today’s standards, with attitudes to women and their place in society that prevented Lizzie from achieving her true potential.

Unfortunately, Lizzie was her own worst enemy by her addiction to laudanum and the trust she put in Rosetti’s declarations of love for her. Had she had a stronger personality with more determination and confidence, I believe that she would have made use of her connections with the Pre-Raphaelite artists, Ruskin and William Morris to live and to outshine them all.

During her visits to Paris she must have been very well aware of the stirrings of Impressionism amongst the French artists and the opportunities for art that the new techniques in photography were bringing. She is portrayed as a progressive intelligent woman who could approach life with pragmatism and who had she lived longer could have bridged the gap that was to arise between the Pre-Raphaelite movement, Impressionism and photographic art.

If only she had not been blinded by love and laudanum, and I had lived at that time.

2 thoughts on “REVIEW: Lizzie Siddal-The Tragedy of a Pre-Raphaelite Supermodel”