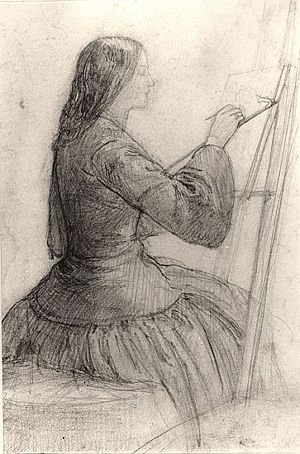 I started LizzieSiddal.com twelve years ago, having spent at least a decade prior studying her. Almost my entire adult life has been in pursuit of this elusive woman.

Like most people, I first discovered her through the story of her exhumation and my reaction was “surely, this can not be true”.

When I read this fragment of one of her poems, my curiosity became something else entirely. Something deeper.

Dim phantoms of an unknown ill
Float through my tired brain;
The unformed visions of my life
Pass by in ghostly train; — taken from Elizabeth Siddal’s poem A Year and A Day

The imagery of dim phantoms, the idea of this woman’s struggle and her ‘tired brain’ reached across a century and gripped my heart. I don’t know if I had ever felt such compassion before for someone so long dead. 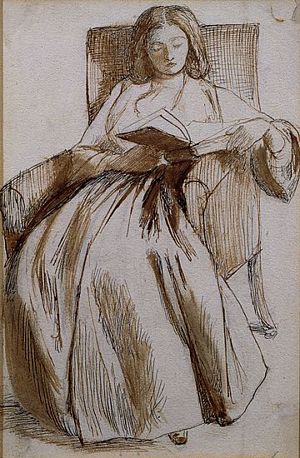 All these years of compiling information about her life and I am just now realizing that she has become, to use her words, my own dim phantom.

Describing the writing of her book Possession, A.S. Byatt said “I had been thinking about such a novel for at least 15 years, and it had changed a great deal in my head during that time. Unlike anything else I have written, it began with the title. I was sitting in the old round reading room in the British Museum, watching the great Coleridge scholar Kathleen Coburn pacing round and round the circular catalogue, and I realised that she had dedicated all her life to this dead man. And then I thought “Does he possess her, or does she possess him?” And then I thought there could be a novel, “Possession”, about the relations between the living and the dead. It would be a kind of daemonic tale of haunting.”

I have come to relate to Byatt’s words. There is no question that my pursuit of Lizzie Siddal happily and unequivocally possesses me. And that, in turn, led me down an endless rabbit-hole of all Pre-Raphaelite art and artists.

For that, I am grateful